I first met James Sexton as early as 1984 when we shared the bill a couple of times with our respective bands and he admitted later to stealing my bass strings. We reacquainted ourselves in the later 80s at Kettering Folk Club, then held at The Three Cocks pub, and soon started collaborating and shared a house, working on acoustic songs before he moved to Germany around 1988. We kept in touch and I popped over to visit him doing a few gigs and  in July 1992 I made the bold move of moving country to seek my fortune as a musician to collaborate with him full time. We lived in a beautiful house on the Karthause, a suburb of Koblenz with amazing views of the Rhine and the Mosel. We didn't have much of a game plan other than to busk and play wherever we could. Parties, wine festivals, university gigs followed. We signed with a local record label/agency but whilst having very nice premises their initial promises didn't come to much.The saving grace was the local Irish Pub where we hosted a regular weekly session often with other guest players, but primarily a showcase residency for what we did and it was here we really cut our teeth. We called ourselves Life Of Riley but soon changed our name to Acres Wild (after a Jethro Tull song both of us liked). Soon we had a decent set together and had built up a good local following - at that time MTV unplugged was only just out and not many people in Germany, let alone crazy English types, wereout gigging acoustic 'alternative' sets. The set covered everything from contemporary acts like The Waterboys, The Levellers, REM and Hothouse Flowers to The Beatles, Neil Young and Bob Dylan but we tried to play our original material as much as possible. Thanks to friends Russ and Johnny who nailed a job at an Irish Pub in Monchengladbach we managed to get regular residencies there and soon started to fill the diary up with similar bookings at other pubs up and down middle Germany. Our following grew and we got asked to play all kinds of events and we soon had the ability to go down a storm wherever we played. To progress though we recognized that we needed to get a cassette/demo out for punters to buy and to get better gigs (these were too early days for CDs!). We bought a four track recorder and started working on it but by then James had a new girlfriend Diane who lived in Glasgow which meant regular trips there for him. I had a summer job on a archaeological dig in eastern Germany which meant time away. It became harder to get together and focus, the demo soon was becoming like Guns and Roses Chinese Democracy and our working relationship was getting more frictional. My digging job ended, the landlord of the house at the Karthause announced he was soon to demolish the rapidly dilapidating building and with no long term place to live I fell into depression. All the free Guinness and being constantly surrounded by booze started to catch up with me and I felt very homesick. I had worked hard to book us a tour with dates for early 1994 but following a Christmas trip home to the UK I decided not to go back. It was a very tough decision to leave so much behind but one I don't regret. James is still a great friend and over the years he's now we have several reunions - the last being at The Artichoke in Moulton in 2013 - which we filmed and you can view here. We've managed to salvage what we could from the demos for you to check out, The songs possess a marvelous naivety and capture where we were at the time. We believed in those songs and gave 100% at all our gigs whether we were a party, on the banks of the Rhine at a beer garden, at an open air music festival, at an Irish Pub, or busking for a few Marks on the street. Often crazy but memorable times. James continues to live in Germany with his wife Diane where they have built up a great following and reputation in their duo The Limpets. He also recently lead a top German Jethro Tull tribute band Thick As A Brick. 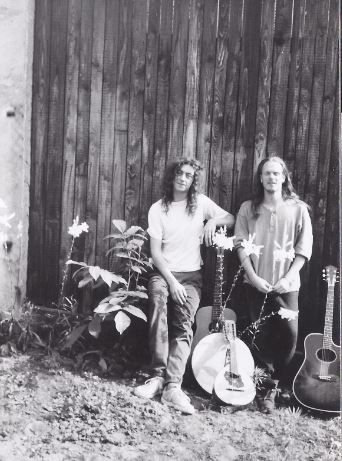 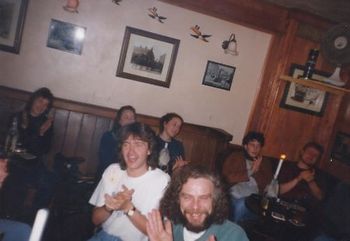 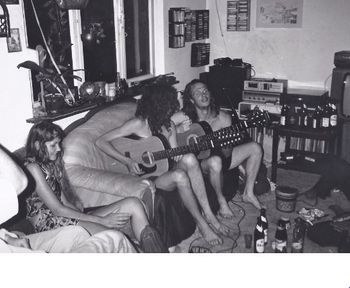 Typical party at our Karthause gaff with Sally at forefront 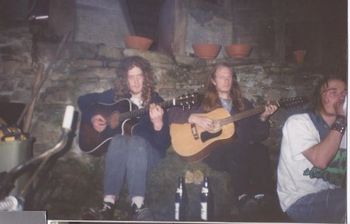 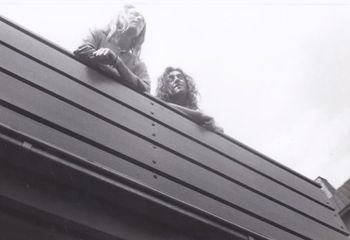 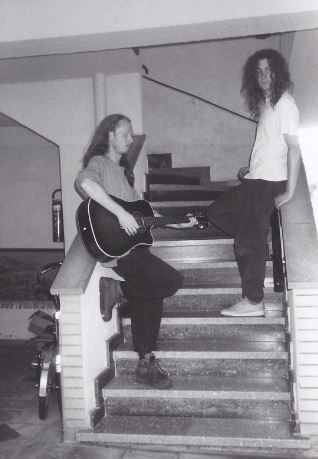 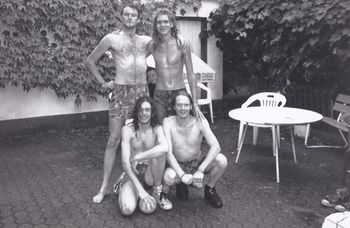 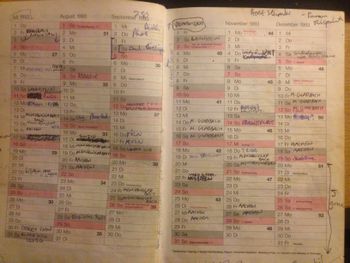 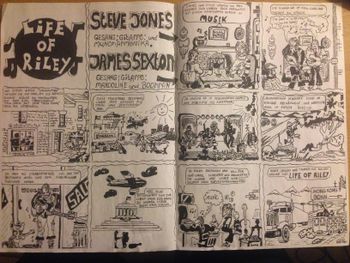 Cartoon biog given out at gigs by Russ 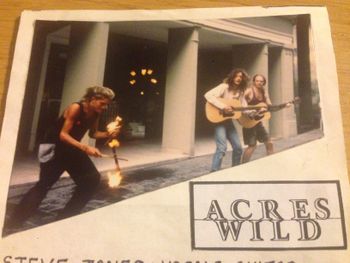 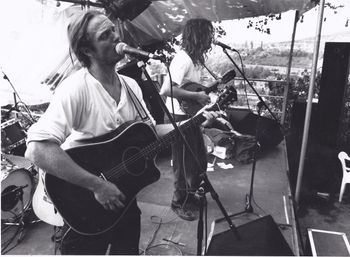 Open air gig at a castle 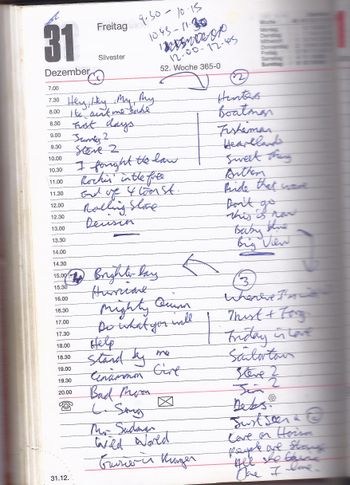 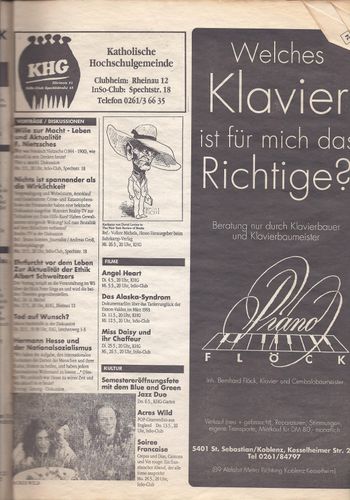 Ad for a gig in Rhein Kultur 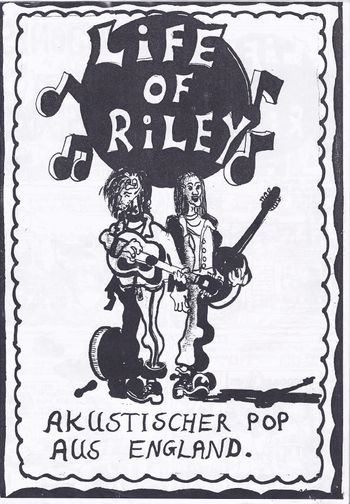 Cartoon biog given out at gigs by Russ - cover 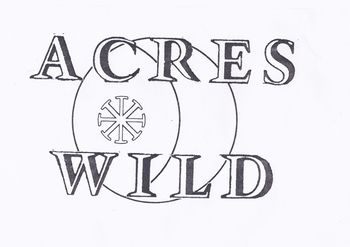 The demo - only a few copies were made 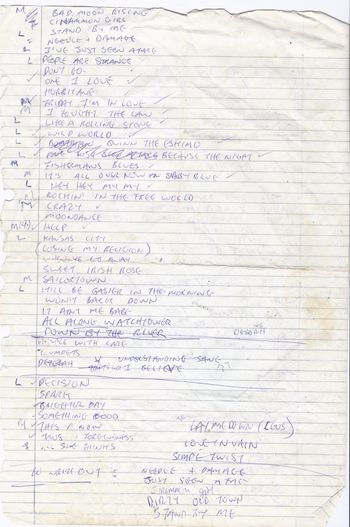 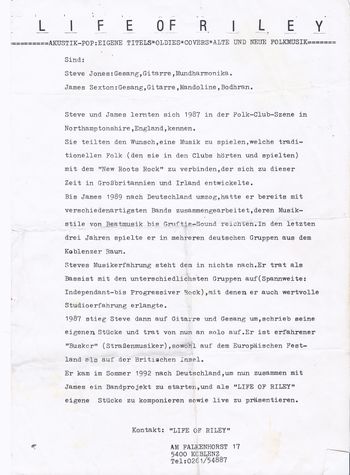 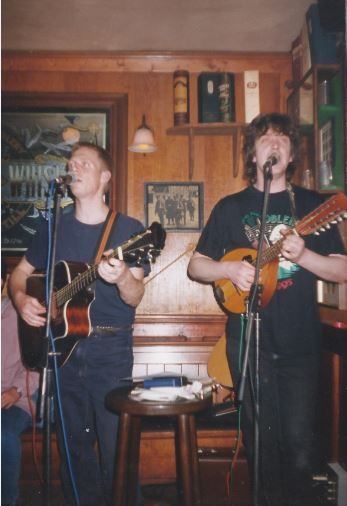 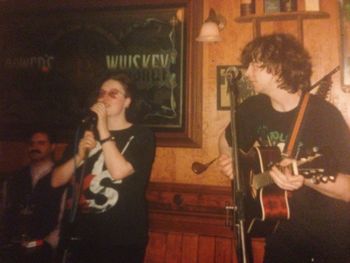 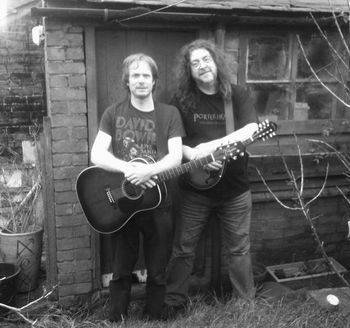 >WATCH THE REUNION GIG - LIVE AT THE ARTICHOKE MOULTON 2013<